Celebrity Eyebrow Specialist Elke Von Freudenberg is considered one of the top eyebrow specialists in the US.

Elke’s Signature brow shaping by tweezing style is all about a natural, full brow, enhancing the client’s best brow shape.

Her expertise has been quoted in InStyle, Elle, Bride, New Beauty, New York Magazine and many others.

A life-long lover of all things beauty, Elke’s lustrous career began in 1982, with an esthetician’s license and high school diploma received in the same month. Starting out, she made her way through college working as a facialist and waxing specialist.

As her career evolved, Elke began worked as an Education Makeup Specialist for Aveda for 8 years and as a top photography makeup artist for over 20 years working on celebrity red carpet appearances for The Academy Awards®, Golden Globes, SAG Awards, MTV Awards, People’s Choice Awards.

Elke also quickly became known for designing brows for actors and their roles for Anne Hathaway, Anjelica Huston, James Franco, Ron Livingston and many others.

Today, Elke helms an impressive career as a renowned beauty expert and eyebrow specialist adding her esthetician’s license in New York City with her namesake Salon.

She also developed her own signature brow product collection available for retail and wholesale in top salons & spas across the USA and Canada as well as online.

Elke’s latest endeavor is her Educational Division for advanced training and certifications to licensed beauty professionals in the US and Canada. Clients are able to experience a private one on one service with Elke. With relaxing music and a calm environment, it’s a soothing get away from the hustle and bustle of New York City. 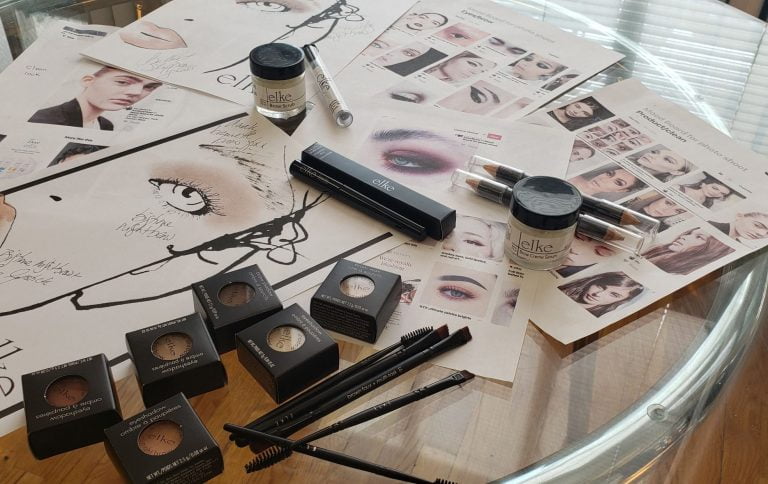 is to provide innovative products that help women enhance their natural beauty with a high fashion twist.

THE BROW COLLECTION is carefully formulated & personally created by Elke to balance the features of each individual. Elke developed her Brow Collection to help design the perfect eyebrow easily. Every product is formulated to help the client achieve perfection at home.

Elke personally develops new formulations and shades that replicate the looks inspired by the beauty & fashion world. Maintaining the elegant look as well as the innovative collection is the standard that her high caliber clientele appreciates.

YOUR BROWS SHOULD BE
AS FASHIONABLE
AS YOU ARE. ARE YOU VIP?SUBSCRIBE FOR MONTHLY UPDATES, NEWS & CLIENT SPECIALS

NEW CLIENT SPECIAL: GET A BROW FREE TINT
WITH YOUR 1st BROW SHAPING WITH ELKE